This morning whilst sitting and watching Daniel playing the need for adult conversation prompted me to check the time of Baby Peeps at the Areodrome children’s centre… 10am and it was already 9.58.  I rushed to grab Daniels coat and hat and I don’t think I’ve ever flung on a pair of jeans as fast.  I got there in time for the usual sing song introductions.

In my head I’m saying, "Why are you asking him he can’t speak?!"  But out loud I smile and say

“Daniel’s fine, he’s been a bit grumpy because of his eczema but other than that he’s good.” 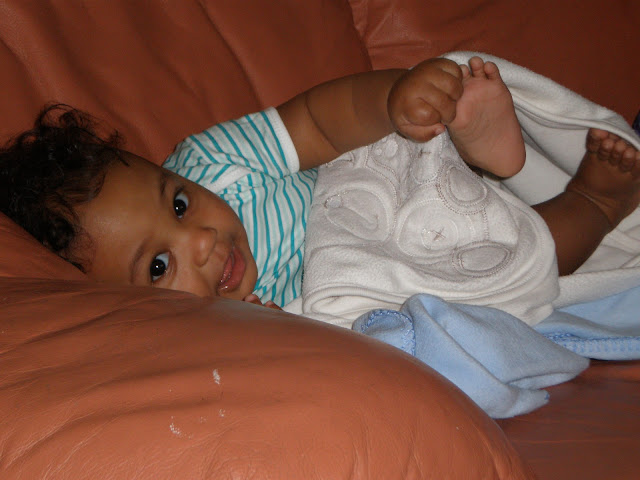 With the songs over it was time to talk to the parents usually it’s all mums but today there was a Dad.  It always makes me smile when I see a dad with his child, especially in a female dominated environment because it must be pretty intimidating for him.  Anyway seen as he was a primary school teacher we had common ground so we got chatting and I found out that him and his wife had both taken 6 months off work to look after their son for the first year of his life.  Mum had done the first 6 months now it was daddy’s turn.  Listening to all the activities he does with his son put’s me to shame!

Unfortunately for Daniel he’ll have to make do with the once a week singing, daily play with mummy and Tianna, the occasional socialising with friends and family and of course all the places Tianna decides to drag us!  The Britain’s got talent audition was great but I dare her to try getting me to queue for 5 hours in the cold again!

With any luck T’s class assembly will have gone well and I won’t have a stroppy pre-teen sulking because I dare to ask for a cup of tea :)
Posted by MummaG at 06:23