I don't know about you but I thought today was FREEZING It's a good thing the children and I have a couple of space hoppers to keep us nice and warm whilst jumping up and down like crazy people. 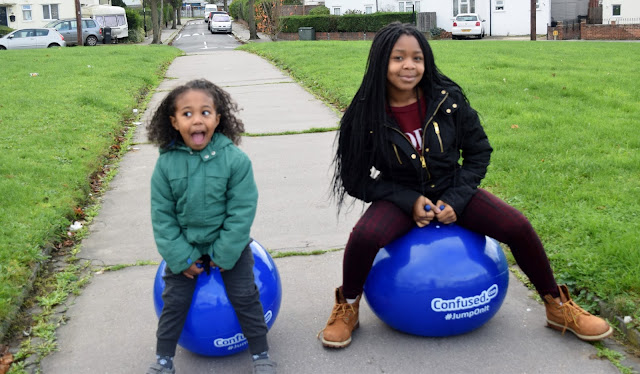 To mark the clocks falling back, and the start of winter, Confused.com distributed hundreds of space hoppers throughout London to brighten up people's day (from Camden to Westminster and Notting Hill).
On 26th October a 'bounce mob' of commuters and children came together in Pottersfield Park for a communal BOING to shake up the city's dreary morning.
After the success of the day, more space hoppers were handed to disgruntled commuters during the two-day DLR strike this week - offering them a fun, alternative way to travel to work (or at least just to bring a smile to their faces!!)
Laura Buchan, Head of PR at Confused.com, says:

“We wanted to do something to brighten up people’s day so we sent out hundreds of blue space hoppers and before we knew it, a ‘bounce mob’ had descended on the capital. It was brilliant to see so many people come down to #JumpOnIt by bouncing on the space hoppers we had. We hope we made the morning just that bit brighter for all who got involved.”

The eye-catching spectacle was all captured on film – watch the video, grab a space hopper and #JumpOnIt!


I have 1 space hopper to give away so fill in your details below to be in with a chance!


a Rafflecopter giveaway
Posted by MummaG at 11:09